In May of 2016, Pine Mountain Trail Association founder D. Neal Wickham passed away. Neal had been the driving force to build the trail and founded the PMTA back in 1975.  After his passing, the trail association began plans for a new trailhead display kiosk off the WJSP TV Tower Parking Lot which is the eastern end of the main trail (Mile 23) to honor Neal. After plans were approved in August, volunteers working with the park maintenance folks cleared the proposed kiosk area near the "Neal Wickham rock".  Then on August 24 concrete footing were poured followed by a long workday on the 27th.  It took several more workdays to complete the project on September 10. A new large display map and trail info panel were installed a couple weeks later.  Then on October 15, Judith Wickham
(Neal's widow) and son Malon Wickham and their families join PMTA folks for a dedication of NEAL'S REST.   Thanks to all the volunteers who worked on this project, especially  Mike Riffle, Michael Wade, Robert Daughtrey, Mark Hughes, Joe D. Skinner, Ronnie & Traci Heard, Bradley Cline, Michael Wade, John Cecil,  Eddie Hall, Jim & Helen Hall, , and FDR's Kerry White for his tractor work (clearing, digging footings holes and working with us to obtain and place rocks around the kiosk.) 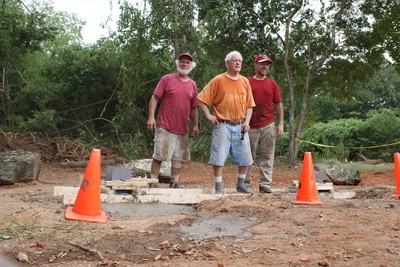 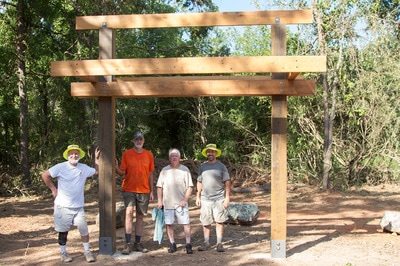 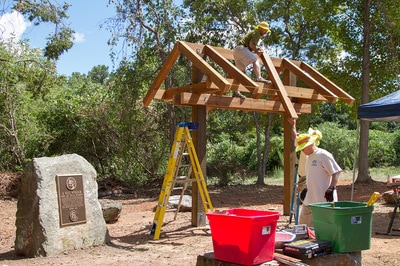 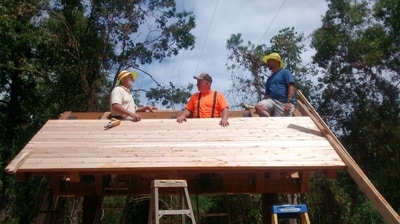 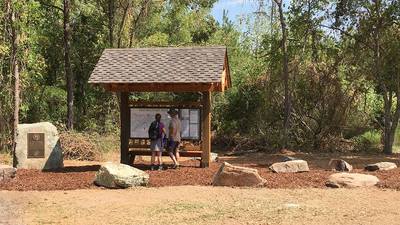 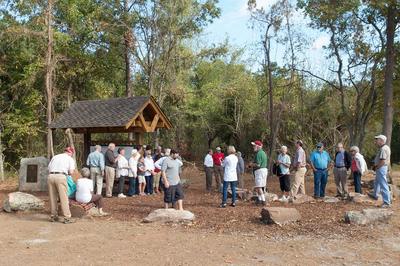 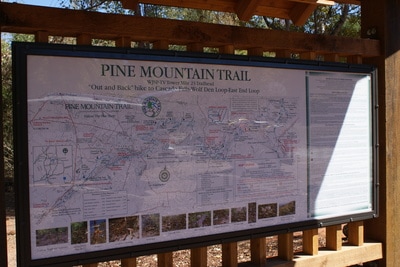 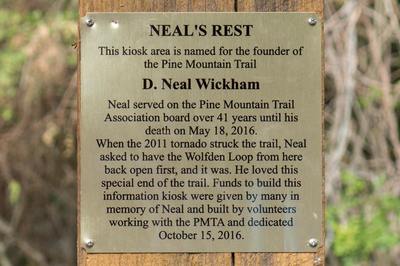 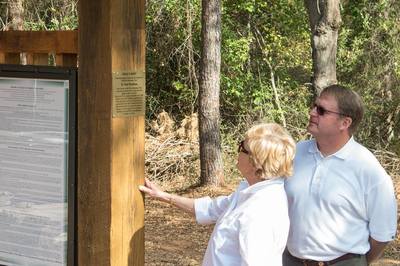 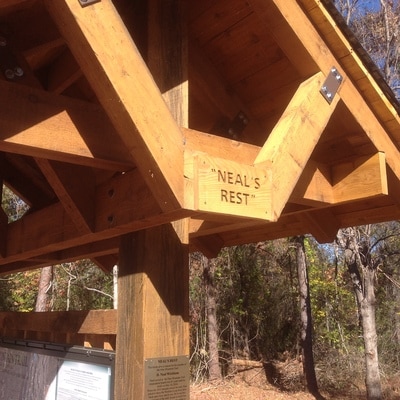 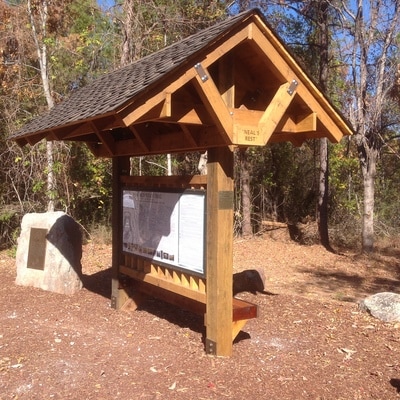 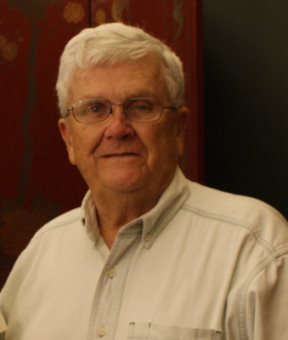 Thanks to all who helped get all the bridges back in place on Sunday, December 27, and those who checked out trail section. The PMT bridges all along from Old Sawmill Campsite to mile 22 were washed downstream some. Water rose about 4 feet in some places near Old Sawmill Campsite.

The area along the streams is clear and rocks are washed clean and lots of new sand along the way. Caution is still advised in some other places along the trails (especially the Mountain Creek Trail) as the trails were washed by the flooding and may not appear as before.

Due to the comments from hikers about the muddy conditions along trail Mile 21.4 to 22, the trail association has done something about the mud. In July of 2014 and then December two different groups of US ARMY volunteers help PMTA members by hauling in pre cut/pre drilled sections of cedar walkways. PMTA members assembled the walkways over areas that were muddy and wet. Some 16 sections (ranging from 8, 10 and 12') were installed. Also new signs and post were installed at all the waterfalls on that section.

A great little campsite about in the middle of the Pine Mountain Trail. On January 25, 2014 volunteers of the PMTA relocated Bethel Creek Campsite in name 2310' (about .45 of a mile) east of the old location (past Mile 13 marker some 600'). The new campsite location is somewhat smaller than the old one and will accommodate at most 5 tents. The site is 737 feet west of the BootTop Trail/Pine Mountain Trail intersection. Water source is a year round spring head just 140' west of the campsite (just 27' off the trail). Note: there is only one fire-ring authorized here (like all PMT backcountry campsites, please don't add fire-rings or move them). There is a lot of downed wood near the new site, and with water nearby campfires are permitted at present time (unless a fire-ban park wide is instituted). Download a full description with photos.

Directions to the site: From the west 600' past Mile 13 to the site. Coming from Dowdell Knob Trailhead (Mile 14.5) come west past the BootTop Trail intersection 737' on west to the site. There is a wooden sign by the trail leading off PMT to camp, and a carsonite sign on opposite side of trail with arrows pointing to camp and down to the watersource.

Back March 20th 2012, the Pine Mountain Trail Association talked with the DNR Parks Region Manager Eric Bently and construction manager Joel Griffin along with FDR State Park Assistant Manager David Jordan about the possibility of working with us to establish a new parking area along Dowdell Knob Road at the Boottop Trail crossing area. More folks are wanting to park at that area to do a hike like over to Rocky Point and several times over the last couple years (especially when doing tornado cleanup last year) we needed to park in that area to head out on the trail to work. For The North Face Endurance Challenge events, The North Face set up an Aid Station on the road at the trail crossing.

With these reasons for the parking area in mind the DNR folks agreed and David moved forward with a formal request for the parking area to be approved. After final review by the DNR botanist, we got the go ahead. The idea was that PMTA volunteers would cut the few necessary trees out, and the maintenance guys from FDR would help by removing the stumps and tops and doing the initial grading.

On May 24th 2012, the trees got cut and May 28th the initial grading was done. Friday, June 1, we worked with the park guys doing final grading and removing limbs, roots etc. That same day the PMTA paid for gravel and the FDR guys spread it. On Wednesday June 13, 2012 the area was paved.

Note: Like anywhere else in FDR State Park, if you park at the new parking area you must have a GA Parks annual pass or Daily Pass displayed on your vehicle. Daily Passes are available from self-pay boxes (noted on the PMT map) or at the FDR Park Office.

Hikers can park at this new area and do the Dowdell Knob Loop from here. It is also a good place to park to do a "down and back" to Brown Dog Bluff, Sparks Creek Campsite, or Brown Dog Campsite.

There is currently no backcountry fire ban. However, while campfires are allowed again, be reminded that campfires are allowed only in established fire rings in the backcountry campsites where fires are allowed. As always, use only dead on the ground wood (use of small saw may be helpful, but scout/group leaders are urged to have youth leave axes at home). Even if you have a fire in the evenings and not in the following morning, drown the fire ring before leaving camp with several gallons of water to make sure the coals/ashes in the fire ring are out (not steaming when water is poured on them.) At present time campfires at Whiskey Still are not suggested unless you carry in enough water to drown out a fire (3-5 gallons) as there is no stream/spring close by. Campfires at Sassafras Hill Campsite are NOT allowed due to infrequent water near that camp.